The Lightspeed tracking data, based on actual card spend among U.S. consumers, shows that: 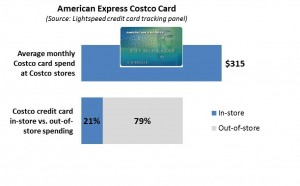